[REQ_ERR: COULDNT_RESOLVE_HOST] [KTrafficClient] Something is wrong. Enable debug mode to see the reason. The Misanthrope Society: A Taipei bar for people who dislike humankind 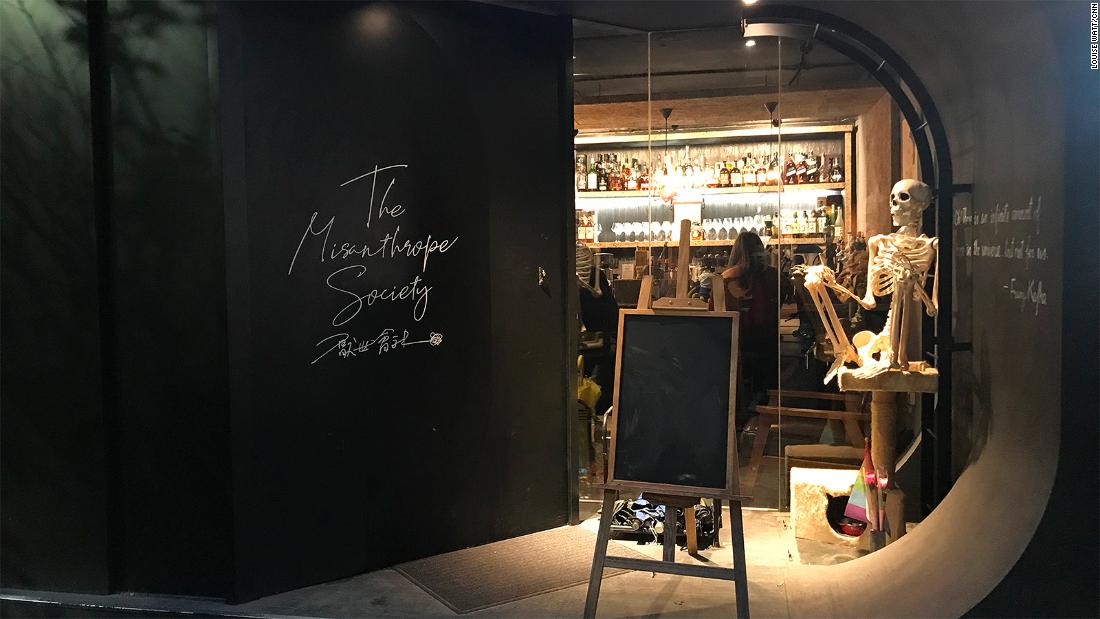 Taipei, Taiwan (CNN) — Hidden away in a dead-end alley, a skeleton perches on a bar stool with a wine glass and a cigarette. Grinning vacantly, he leans against a wall emblazoned with a quote from Franz Kafka: “There is an infinite amount of hope in the universe … but not for us.” This is your welcome to “The Misanthrope Society,” a bar that offers drinkers and diners a respite from other people.The quirky addition to Taipei’s bar scene serves up creative cocktails, black humor and a dislike of humankind. Its cocktails sound bleak: “Ghost Island Tea” has Taiwanese Spring Vodka and Kavalan Whisky, plus dashes of tequila, kahlua, vermouth and lemon juice; “Kafkaesque” blends together “Kaffe und Wodka” and other spirits with root beer. A mix of Midori, sake-based Mikanshu, cherry brandy and Absolut Vodka comes up with “No Longer Human.”The cocktails have names like “Ghost Island Tea” and “Last Words.”courtesy The Misanthrope SocietyIf you order the gin-based “Last Words,” you are politely asked to write down what you will say on your deathbed to add to a pile of cards in the bar. “Stay ridiculous,” reads one. The bar itself is characterized by dark humor and dark décor: black walls, a black menu, black plates — even the fried chicken is black, after being marinated in traditional Taiwanese fermented bean curd, splashed with alcohol and set alight. Diners are left to watch flames shooting out of what looks like black remains, a fried chicken dish that evokes the image of hell. As if you didn’t get the message, “Hell is other people,” the famous quote from Jean-Paul Sartre, is painted on a wall. “You can hate this world as much as you want”The anti-social theme of the bar belies its inclusiveness; the owner, who has suffered from severe depression, wanted to provide a space that was welcoming to others in need. “We call it ‘The Misanthrope Society,’ which literally means you can hate this world as much as you want here,” says Chen Xiaoguai. “I want to attract people with the dark side,” so they can then help each other and experience “the warmth from different people,” he adds.”The Misanthrope Society” is located in one of Taipei’s most happening districts, bang in the middle of a bustling night market selling clothes and snacks, and less than a minute’s walk from the Gongguan metro station. But owner Chen has managed to find a space that is perfect for a bar that professes to hate human society, in a dark corner of a road that leads nowhere, where no sunshine reaches. Inside, though, is some hidden human warmth. Chen was inspired to open the bar after spending a month in a mental health hospital. There he received specialist care from psychologists and other health professionals, but felt like the system stopped providing support after he was discharged. “I think the most important thing in my case in stepping out from the dark side is the help from people, the friends I met in hospital,” says Chen, who used to be an engineer. “I want to replicate this peer support group.”However, many people with depression choose not to drink alcohol because it makes their symptoms worse or mixes badly with their medication. At The Misanthrope Society, you can get that sense of community without the booze, as the bar is also a coffee shop and bookstore, offering psychology books, autobiographies and novels about dark episodes in people’s lives. Books lined up on a coffee bar include “The Museum of Broken Relationships” and “Poetry About How Much I Hate My Life.”Since opening the space in February last year, Chen says people “came here to cry, to talk to me, to just stay, read my books.”More than a dozen regulars who experience similar mental health issues have got to know each other and formed their own support network. In Taiwan, mental health is not talked about much and is often still misunderstood and stigmatized. “Before, these people probably can only talk to their family, their friends, who can’t really understand them, especially our parents, the older generations, who have no idea or knowledge of mental health problems,” says Chen, 28. Older generations might suggest problems can be solved by talking to a temple official, or through superstition. The bar’s black fried chicken is set aflame, giving it a hellish appearance.courtesy The Misanthrope Society”The Misanthrope Society” offers an outlet for all drinkers and diners to express their mood, and that starts with what you order. The “furiously stewed” duck may appeal to those feeling angry, while the Scotch egg’s Chinese name translates as “withdraw into one’s shell.” Chen was once asked to create a cocktail for “the feeling of being enslaved by society.” He created one “opaque in color, strong in flavor.” It would be wrong, perhaps, to call this an anti-bar, as many lone drinkers have sought out solace from other people in bars the world over. But by humorously playing up the dark side, “The Misanthrope Society” draws in people wanting a drink with a difference, as well as those hoping for a bit of understanding.”Are you sure you want to go back to real life?” a sign on the door asks on your way out. The Misanthrope Society, Roosevelt Road, Section 4, Lane 40, No. 1-2, Taipei; Open Sunday to Thursday, 2 p.m.-1 a.m.; Friday and Saturday, 2 p.m.-2 a.m.

We are on mobile